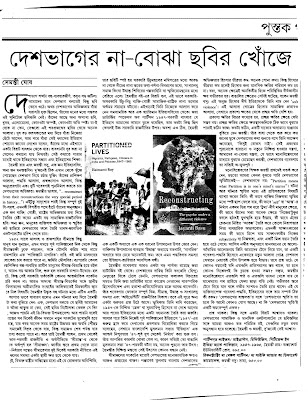 
"Published by Samya the book has tried analyzing the complex feelings of hatred and longingfor the homeland that has contributed to  shaping the personalities of a generation of people who were forced to migrate under the shadow of a fear that they could not fathom, much less comprehend....

Dr. Basu draws on her experiences as a psychoanalyst, and tries to delve deep into the events of the greatest migration in history through the collective memories of her patients...

... book also dwells on the anti-Muslim violence and the ferocity of Hindu anti-socials in Kolkata during the riots, and helplessness and gulit teenagers witness to the killing of innocent Muslims harboured for years. Even as it turns to look back objectively at an event that geographically redrew boundaries, and created divisions where there were none, this captivating document demands that we learn from history. It is also an appeal to recognize our common legacy in the wake of the myriad problems the partition created."

Read the full review at: http://www.d-sector.org/article-det.asp?id=1778

Review of 'Sketches of Hootum the Owl' in Frontline


Hootum Pyachar Naksha presents a realistic picture of 19th century Calcutta and weaves in thinly disguised references to real-life personalities of the times. By SAYANTAN DASGUPTA

A CITY peopled by quacks who claim to have magical powers, moneylenders who are more resilient than leeches, and absentee landlords who fritter away their wealth by maintaining hordes of sycophants and by organising rooster fights, animal weddings and titillating khyamtadance performances. A colonial capital in the throes of monumental change. A space of intellectual ferment where debates over widow remarriage, English education and Brahmoism evoke strong emotions.
All these aspects of 19th century Calcutta are captured with finesse by Kaliprasanna Sinha in his Hootum Pyachar Naksha, which was first published in Bangla around 1861. The work has remained extremely popular in its Bangla avatar down the ages, perhaps as much for the sarcasm, irreverent humour and bawdiness it embodies as for the way it documents Calcutta of the 1850s and 1860s. It is also a work that has defied being bracketed as any one of the better known genres. Hootum Pyachar Naksha presents a realistic picture of contemporary Calcutta and weaves in thinly disguised references to real-life personalities of the times. It thus straddles both fiction and “non-fiction” and qualifies equally as “sketch”, satire and documentary.
Sinha remains largely unknown outside the circle of Bangla-speaking readers. Perhaps part of the reason for this lies in the fact that Hootum is an immensely challenging text to translate. Chitralekha Basu’s translation is probably only the second complete English translation, the first one having been published as recently as in 2007. No wonder then that acknowledgment of Sinha’s literary contribution has remained largely peripheral, if not entirely non-existent, outside Bengal.


Sinha was born into a well-to-do family in 1840 and was only 30 when he died. Though he was well known for his support for social reform, his chief claim to fame in the field of literature rests on Hootum, a work in which he assumes the persona of an owl keeping vigil on and cataloguing the different aspects of the city, and on the multi-volume Bangla translation of the Mahabharata which he commissioned. Yet his position within the history of Bangla literature may have been different had it not been for the overwhelming influence of Bankim Chandra Chattopadhyay. For Hootum ushered in a new literary register of Bangla. Sinha chose to write in the language of the street as Pyarichand Mitra alias Tekchand Thakur (Alaler Gharer Dulal) had done before him, weaving in onomatopoeic words and even coining new words every now and then as Chitralekha Basu points out in her note on the translation. Everyday language became the language of literature for Sinha. In that way, he signifies the road not taken—Bangla literature, of course, would choose to go the way of Bankim, basking in the comfort of chaste, Sanskritised Bangla. Had other contemporary writers chosen to follow in Sinha’s footsteps, the history of Bangla language and literature would have been very different and Sinha may have got the recognition he deserved for the pioneering role he played.
While no translation is ever finished or is entirely satisfactory to everyone, Chitralekha Basu must be congratulated on the very attempt to translate a text such as this. One may quibble over the efficacy of the attempt to lend some sort of completeness to the staccato sentences of the original through the insertion of parenthetical words and phrases—a strategy the translator employs, and one that does seem to distract the reader sometimes —and over the need for some of the annotations provided, but all in all the translation does manage to capture the flavour of the original and read well, too, and that is no mean achievement when it comes to a text like Hootum Pyachar Naksha.
Sketches by Hootum the Owl is based on the 1868 edition, which combined Part I and Part II (published separately in Bangla). It has 10 chapters in addition to the prefatory comments, introduction and annotations. The first is called “Going Round in Circles” and is based on the Charak festival as it was celebrated in 19th century Calcutta. It depicts the practice of devotees swinging from ropes with iron hooks embedded in their backs as part of the rituals, but describing them is not the only objective of this chapter. Charak only provides Sinha the occasion to explore a larger social context. Thus, this chapter doubles as a trenchant critique of superstition within contemporary Hindu society.
It is also unsparing in its satire aimed at the culture of sycophancy that had developed around the babus of Calcutta. Similarly, the narrator mocks the hypocrisy of some reformist Brahmos who vociferously reject the practices of orthodox Hindu religion and at the same time participate in the rituals because their “forefathers had been doing the same thing since the last seven generations”, and who “celebrated Durga Puja at home and yet visited the Samaj every Wednesday where they would close their eyes and howl like bereaved souls”. These are all themes that recur in many of the chapters that follow.


“The Baroyaari Pujas in Calcutta”, the largest chapter of Hootum, again serves to mock the wasteful expenditure and the vanity that were part and parcel of the babu culture of 19th century Bengal. Incidents of people cleaning their bottoms with rose water, spending a thousand on dogs’ weddings, throwing money at jatra performers and going to bathe in the river in a carriage drawn by four horses to the sound of trumpets are “few and far between”, Hootum remarks in his typical tongue-in-cheek manner. The chapter also catalogues the follies, foibles and failings of various well-known babus of the times and their “reformed” sons. In one particularly telling incident, a college-going son in a state of inebriation beats up his father and then says, “Long live Vidyasagar!... Now I will get you the kind of father with whom you and I could sit together and drink to our health. Let that old fool die. I want a father who is quite reformed!”
The clash of ideas Sinha’s age embodied is well manifested in the baroyaari Durga idol he describes —its frame was decorated with images of Scottish highlanders on horseback; “the idol’s face was that of a European woman”; Brahma, Vishnu and Siva could be seen putting their hands together and praying to her; little English fairies could be spied playing the horn above the idol, carrying the Union Jack!
Contemporary historical events work their way into Hootum’s narrative. Thus, the 1857 “Mutiny”; the “death” and return of Pratapchand, the Maharaja of Burdwan, which evoked immense interest and emotions in Hootum’s Bengal; the sojourn of the Badshah of Lucknow in Calcutta before he was to be exiled to England; the indigo rebellion—all of these find a place in this book. So does the coming of the Railways —and this is documented in one of the most hilarious chapters, where two devout Vaishnavites aiming to visit Benaras are forced to share a carriage with an inebriated Brahmo. But the element of the comic coexists with the tragic; the chapter goes on to paint a poignant portrait of the colossal insensitivity of the British rulers to Indians.
Among other things, the book documents the various forms of popular entertainment in 19th century Bengal; genres such as the jatra, the half-akhrai, the panchali, the khyamta and the kirtan all figure prominently in this text.


The narrator of Hootum is equally critical of the rigidity and orthodoxy of Hinduism and of the hypocrisy that often went hand in hand with reform, of revivalism, and of the blind imitation of the West. In his attempt to articulate this critique, he paints a fascinating picture of 19th century Calcutta, a picture that is as entertaining as it is thought-provoking, and as farcical as it is tragic.
Source: http://www.frontline.in/books/calcutta-of-yore/article4935078.ece

Posted by Stree Samya at 3:28 PM No comments: